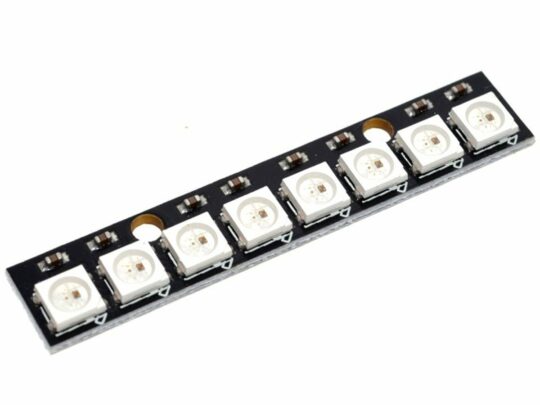 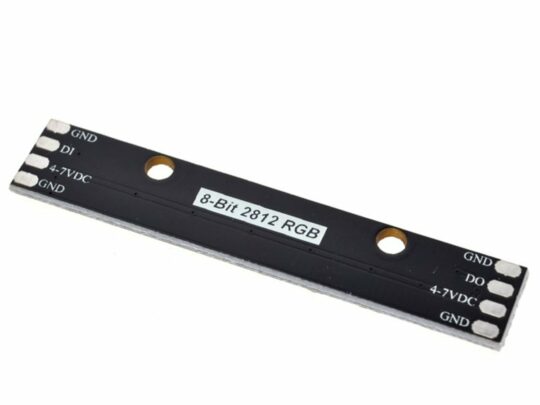 A strip of 8 fully addressable RGB LEDs WS2812B in the big 5050 SMD package (5×5 mm), fully controllable by a single wire serial connection from any microcontroller.

This module is compatible to Adafruit Industries “NeoPixel” LED modules, and can be controlled by Arduino “NeoPixel” library.

The modules have mounting holes, and can be cascaded to build bigger arrangements.

Every LED contains its own 18mA constant-current driver, and an addressable driver chip, and will work without any current limiting resistors on a power supply of 4-7V.

Since the data protocol is quite timing-specific, you will need a faster microcontroller (at least 8MHz) to control it. You can use it for example with an AVR and Arduino, PIC, STM32 or similar controller. You will have no luck with “interpreted” controllers like Basic Stamp or Picaxe.

Adafruit registered the brand name “Neopixel” for these LEDs. But the manufacturer is Worldsemi and not Adafruit. Don’t get fooled and believe this would be developed by Adafruit. Adafruit only created a library for Arduino.

We have single WS2812B LEDs and different modules (8 LEDs, 16 LEDs, 64 LEDs), compatible with Neopixel library for Arduino, in stock.